Beginner Still having beginner problems with lighting (in camera flash)

Here's a couple of examples from me, not perfect in any way shape or form but i was in the same boat as the OP and listened to some good advice about off camera flash.
I'm still very much a beginner with flash

Direct on board flash

Yongnuo Manual Speedlight mounted on camera with a home made honeycomb

nickjohnwatson said:
Here's a couple of examples from me, not perfect in any way shape or form but i was in the same boat as the OP and listened to some good advice about off camera flash.
I'm still very much a beginner with flash

Direct on board flash

Yongnuo Manual Speedlight mounted on camera with a home made honeycomb

Nick
Click to expand...
Awesome
(not the pictures obvs)
A great example to show that light travels in straight lines and that the quality of shadows is governed by the relative size of the light source. looking at the background we even get a hint of the inverse square law in action.

Again - lighting is simple. That's why its so flipping hard to be creative with it.
Gone fishing

Phil V said:
Just to prove the 'experts' don't always agree, I'd go with a purely manual flashgun as the situation is very controlled and it'd take a tiny amount of trial and error to get the exposure nailed. Although the new small Yongnuo ETTL is such a bargain it'd be a shame if you couldn't stretch to one.

But where David and I definitely agree, there is no way that you can make the built in flash produce acceptable light as the key light. It'll produce a useful fill, but it's hardly an answer to the OP's issue
Click to expand...
You can always use a TTL flashgun manually Phil.. which I often do, but TTL is a godsend in certain situations. Actually buying a manual only flashgun is not something I'd recommend. Buying a decent TTL one is... then learn to use it manually for when you have to time to deal with things at a more leisurely pace... studio work for example. When you're trying to handle a hazardous reptile?... I think TTL is probably required
-------------------------------------------------
Cameras don't take photographs... People do.
J

While I was at the Photography Show in Brum this year, someone showed me the Rogue flashbender kit with the softbox. I'd been a bit dubious about it and reluctant to invest in one, but I was seriously impressed. The guy took a shot of me head-on and my glasses didn't even reflect. Thinking of this + flash bracket = nice event kit set up.

Did it reflect in your glasses when he took a photo without the modifier? - or did you not get a comparison?

Nobody's mentioned to the OP about metering and exposure compensation, either. Shooting dark snakes on a black sheet is going to make most camera meters want to bang in a whole load more light than necessary with that little popup flash.

Sorry to add in another layer of confusion, gothgirl - but if you've got your camera on anything other than manual mode with manual flash, your camera is too clever by half. Which means you're going to need to get to grips with flash and exposure compensation, too. Your camera almost certainly wants to make that black sheet into a grey one and you've got to dial in enough compensation to bring it back to black.

Yet another reason to get that cheapy off-camera flash and some kind of sync cord for it, then to go to work with a load of white paper and make a background, some diffusers and some reflectors!

Lyope said:
Nobody's mentioned to the OP about metering and exposure compensation, either. Shooting dark snakes on a black sheet is going to make most camera meters want to bang in a whole load more light than necessary with that little popup flash.
...
Click to expand...
It'd been done, but it's still far from the important issue, especially as the advice is to get a manual off camera flash.

TimmyG said:
Actually Alistair just made me think of the other factor at play here. The vast majority of the image here is black (or at least it should be) but the camera doesn't know this. Your camera will always assess the scene as being middle grey. Take a picture of judt the nlsck sheet, then do the same of a pure white sheet to see what I mean. If left to the camera to decide, you should see thst both images look pretty similar; I.e. grey.

To overcome this you need to tell the camera that the scene it is looking at is largely black, and when using flash you do this with something called "flash exposure compensation" check you manual to confirm how to adjust this, but I would say you neef todial this down by -1 for these types of shots.

That said these images don't look overexposed, so moving the subject away from the background will likely have more of an impact in this case.
Click to expand...
Gone fishing

Phil quoting me has directed my attention back to this thread and despite the great advice being given, it seems to have taken a nasty turn somewhere along the line which I still can't fathom. Gothgirl, I think your decision to invest in a separate flash unit is a sound one, and will enable you to be much more creative with your lighting. That said it was a while before I invested in a separate flash unit and tried to make do with what I had. I took a look through some of my earlier experiments and found this one which might help to illustrate the point (I believe someone was asking for examples); 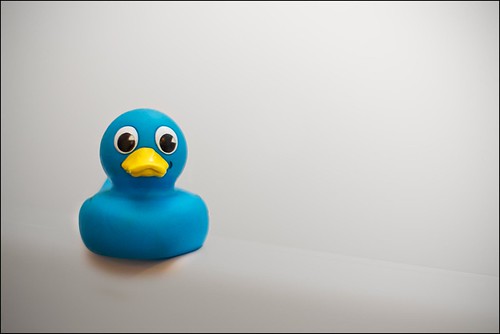 This was taken using the pop up flash with the cardboard roll left over from a roll of toilet paper on top to direct the light to the right hand corner of the room. Admittedly it is rubbish, but there is some directional light going on. Also this was in a white bathroom with the duck placed on the edge of the bath, so the light was bouncing all over the place, but it honestly looked far better than having the pop-up flash pointed directly at the subject.

I also found this example of a similar setup that was taken shortly after I got my first flash (I went with the 430 EXII, but my next flash purchase will likely be a yongnuo): 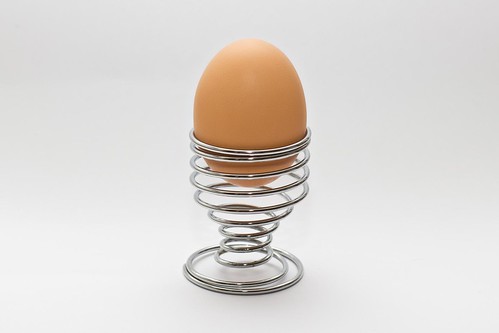 Again this is bounced light (from above I believe) and I would describe it as even, but boring. Again this was taken with the flash on camera, but obviously I have more power to play with.

It wasn't until I started playing with off camera flash that things started to become more interesting (ok the lighting at least if not the subject matter): 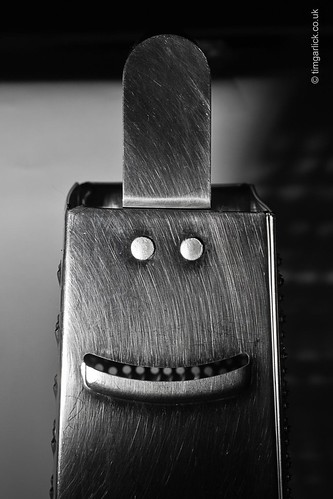 Sorry I don't have any examples with black backgrounds, but I might give it a try sometime if I get the opportunity. While I do think these are good comparisons of the differences between pop-up and separate flash, I don't think they help you much with your particular issue and I suspect you will still need to figure out a way of moving the snake away from the background in someway (or possibly try with felt, as has been suggested), even if you are able to be more creative with the lighting.
flickr
You must log in or register to reply here.
Share: Facebook Twitter Google+ Reddit Pinterest Tumblr WhatsApp Email Link
Top