What and when was your first serious camera?

Mine was a Chinon SLR (forget the model) bought from Dixon's in 1974. I had just left school so bought it on the 'never never'. I used it intensively for 16 years until it was stolen one day in Amsterdam.

A Nikon D5000 and kit lens. Beginner stuff really but it got me on my way.
My website

My first was a used Nikon D40x and kit lens. Taught me the basics, the exposure triangle etc and stoked my interest. First serious camera was my upgrade to a D7100 though I'd say.

Nikon FM, bought used in 1988. Still got it somewhere.

If byserious we mean DSLR, then mine was about 2005 with a Canon 350d prior to this I had Canon 35mm p&s and a Fuji bridge camera
My Flickr
My Website

What's a "serious" camera? I've always been very serious about all the cameras I've ever bought, or mended, or been given to me as presents. It started over 60 years ago when I was given a folding 120 film camera with holes in the leather bellows and a stuck shutter in case I could mend it and get some use out of it. I mended it. But how can I tell whether or not it was a serious camera?

Olympus OM10 with a 50mm lens, purchased back in 1981
www.flickr.com/photos/martipa

Second hand Zenit TTL around 1980, a birthday gift from my dad.

An extremely low tech Russian SLR, it was so solid and heavy that it gave the impression of being carved from a solid brass ingot.

Awful camera - fantastic gift.
It inspired my enthusiasm for photography and due to its severe limitations I had to learn the fundamentals of photography (exposure triangle etc. etc.).

A chinon slr back in the early 60,s with 50mm and a 135 lenses ,it even had a built in exposure meter , it got me on the ladder anyway , best film camera though was a Mamiya C330 with a set of interchangeable lenses . Loved that big beast
in Xanadu did Kubla Khan
a stately pleasure dome decree:
where Alph,the sacred river ,ran
through caverns measureless to man
Down to a sunless sea

Zenit E probably in 1974 or so. Quite quickly got a set of extension tubes, a Pentacon 200mm and a forgotten brand of 28mm. In 1981, it got stolen from Hotel Carter in New York along with my first Pentax ME Super and other kit.
You can't erase a dream, you can only wake me up!
T

A Praktica L in about 1976. This then set me on the road to buying many different cameras.
O

Another Praktica user started around 1970 with a school camera, brought a Olympus OM1 once I started work (1972).
https://www.flickr.com/photos/owenmerricksphotos/

This one, which I still have. 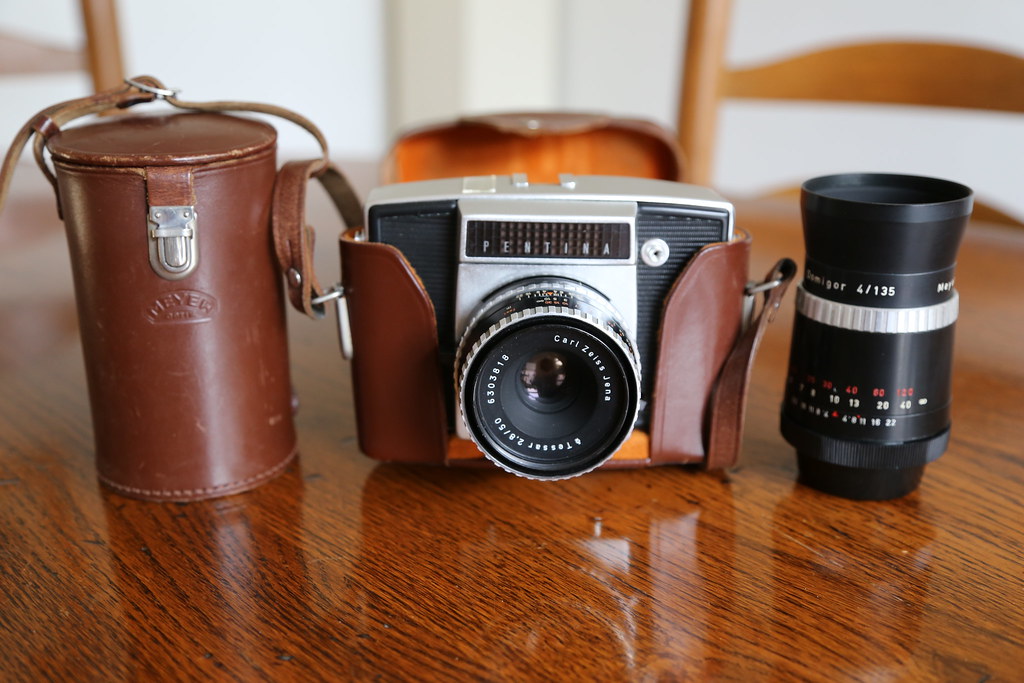 Followed by a Canon A1 (the first thing I saved up for and bought when I started work at 16), which I also still have.

Mine was a Sony A350, bought from Pixmania, and it came with an EU plug. Actually found it in the loft about a week ago, still works perfectly.

I'd just started a new job, moved house and bought a new car, so I was on a really tight budget

I can't remember what I paid, but I remember it felt like a fortune, if only I'd known how much photography would end up costing me haha
OP
P

I remember lusting after the Olympus OM1 when it came out but finances dictated sticking with my Chinon.

Having owned lots of different film cameras my first SLR was a Yashica FX-3 (with 50mm f/1.9 kit lens). This is still in my camera storage bag but hasn't seen any use for a while - far too long really.

My first DSLR was a Nikon D40 with 18-55mm kit lens, which was traded in for a D90 at some point.
Regards
Bristolian
S

I am probably really dating myself by this. My first SLR was the Nikkomat FTN bought new back in 1970. It was way beyond my means. So, except for the fine kit lens I had to 'settle' for Vivitar lenses. I could only afford black & white film, and to keep the expense down I began developing and printing my own. Strangely only when forced to begin doing my own darkroom did my true interest in photography take hold. I stopped all my photography when I had to take a big cut in pay, and never financially recovered from that in 1975. Only after retirement could I afford photography; more to have something to do than anything else. Now all I do is digital. I really miss darkroom work.

Peter Dransfield said:
I remember lusting after the Olympus OM1 when it came out but finances dictated sticking with my Chinon.
Click to expand...

The first two were bought used as I had kids too. It wasn't until 1985 that I pushed the boat out and bought a new OM4 - I'm pretty certain it was a little over £600 which was a big lump of money for me at the time.
Flickr

This Agfa Isollete II - and it still works well.

Mid/late '70s. Pentax S1a.
Cogito cogito ergo cogito sum.
The above is my opinion - it may differ from yours.
Tsikoudia doesn't contain many vitamins, that's why you should drink lots of it!
Quam minimum credula postero...

Minolta X-700, built the same year as I was born, inherited it when I was maybe12/13.
Pitch To Inspire
Follow me on instagram

I've had a camera since I was ten years old but just point and shoots so I suppose my first serious camera was a Nikon SLR. I can't remember how old I was but I was working hard and earning good money and had decided to buy myself a present every month and eventually I got round to buying a camera so I went to Jessops, asked them what was better than my point and shoot and came out with the Nikon and a kit lens and I used it for something in the region of twenty years or more.
Last edited: Dec 9, 2018
D

Lasted until 1982 when the fabric shutter started misbehaving.

What qualifies as a "serious" camera? I used film cams for years then moved on to digital compacts, I guess the first time I specifically wanted more control was when I got the Fuji s1000fd bridge, great little camera for it's time.

My first serious camera was a Fuji STX-1 bought in Jersey for £50 or thereabouts with a 50mm lens. I'll be honest and say that I didn't learn anything with it and didn't pursue photography seriously until I bought a Nikon D7000 from here a few years back. The STX-1 is now only ever used as a prop. 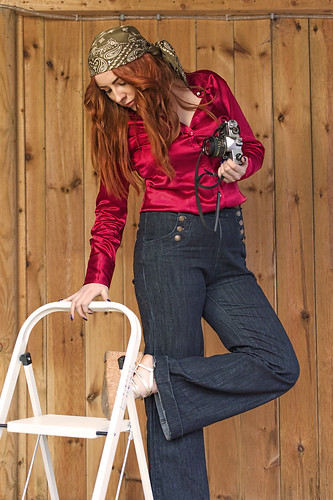 As others have said, "What is a serious Camera?". Probably any camera, that we use to take photos seriously with.
My first serious camera, a very basic canon compact, the model number escapes me at the moment. But I took serious photos with it, or at least serious to me.

I suppose the latest top end camera, is not a serious camera, if not used for serious purposes.

This reply is only done in fun, not to be taken too seriously. No pun intended.

Hi, a PORST CX6 in 1973, a westernized East German practica:

My first picture. Being a parsimonious university student, I put in a B/W film, and took a picture of the lamp in my room by accident:

Some people say, my pictures have not improved much in the following decades ...

well, my first SLR was a Practika MTL3 - but it wasn't so much a serious camera, as a camera shaped film shredding device. Every third film (on average) would end up with the sprocket holes torn off and having to unload the film in a dark-bag and try to manually rewind what I could into the canister, or, try and recover it and get it into the dev tank in bits. Unfortunately (or perhaps fortunately depending on how you look at it) it fell off a bivi ledge while I was climbing the Aig. Vert over in France. First bounce was around 1000ft below, second was another big bounce, third impact was into the snow of a glacier and it basically disappeared. So, there I was, on the climbing holiday of a lifetime, not much money, and no camera to record the event. Rang home thoroughly miserable, spoke to my dad and bless his heart, he just said "how much is that Canon AE-1 you were trying to save up for before you went away in the shops over there ??" - next day he went to the bank after his shift at the Pit, and paid enough money into my bank account that I could buy myself a AE-1 and the F1.4 50mm.

I only realised when I got home a month and a half later that he'd basically stayed in to put the money back into the bank for the next month or so... Fortunately, I started a proper paying job a couple of weeks after returning, and my first months salary cheque basically ended up getting cashed, dropped into an envelope with his birthday card.

So, yeah, the canon AE-1 was my first serious camera.

jonbeeza said:
As others have said, "What is a serious Camera?". Probably any camera, that we use to take photos seriously with.
TE]

I think this was what I had in mind, a camera good enough to do 'photography' with. My family had an old box brownie that was used to record family events etc but clearly didn't cut it for 'taking photos seriously'
Last edited: Dec 9, 2018

"Any fool can appreciate mountain scenery. It takes a man of discernment to appreciate the Fens."
(Harry Godwin - pollen analyst - circa 1932)