Like this Ian, sat on the fence with the frame though. Think a little vignette would have the same effect as the frame.
My Flickr

How about some nice WHOLEmeal Bread 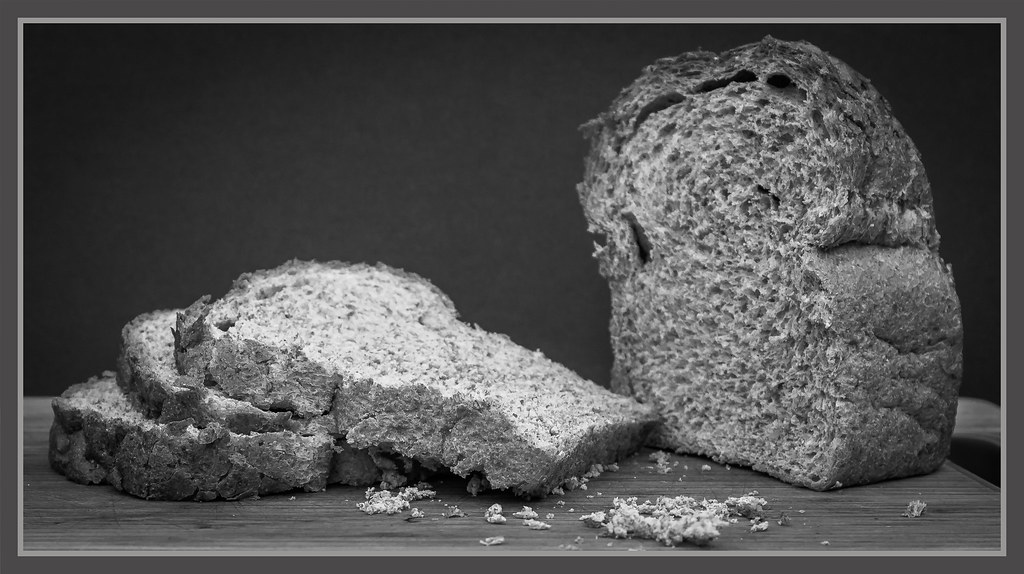 Crowd #2. Is my favourite. The bikes and parking attendant has a good story in it, like the aspect ratio of the shot too.

Decay. If it’s marmite I’m on the love it side.
Good clean image with DOF and mono theme

I like your thinking....Stan's too in fact....when you see my 'whole' image, you'll see why!!
I like the DoF and the black background works very well....nice crumb work there also!
Definitely an 'upper crust' image!

Very nice shot for Whole Ian. Works very well in mono too. I love the way it brings out the textures.
Cheers,
Lee

Like the bread pic good choice for mono too

Whole
I'm liking the black and white. Only one thing, the top slice is a little bit bright.
OP
OP

Well, being that i'm in the south of France on my holibobs, I thought there must be something I can throw at this week's theme.... 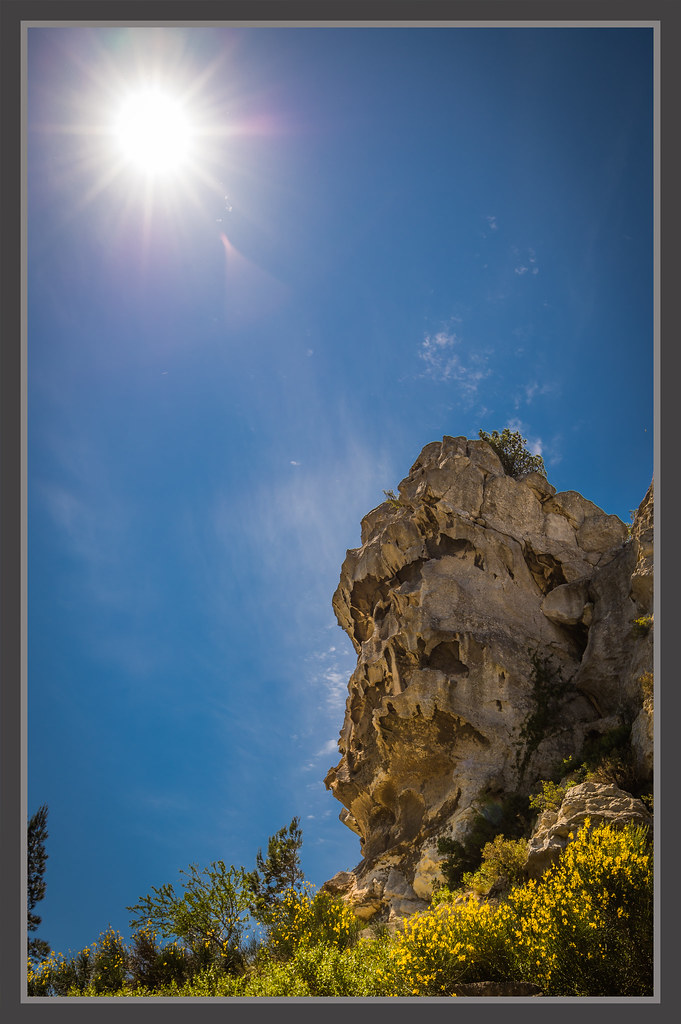 lovely photo great light and bright colour, I like the inclusion of the sun

Dave70D said:
Like Stan`s bread shot for the theme, a very good choice to also have it in mono too and leaving the crumbs in.
Click to expand...
Thank you Dave - it's all about the crumbs

Chenti said:
Crowd #2. Is my favourite. The bikes and parking attendant has a good story in it, like the aspect ratio of the shot too.

Decay. If it’s marmite I’m on the love it side.
Good clean image with DOF and mono theme
Click to expand...
Thank you very much Chenti

I like your thinking....Stan's too in fact....when you see my 'whole' image, you'll see why!!
I like the DoF and the black background works very well....nice crumb work there also!
Definitely an 'upper crust' image!

Click to expand...
All puns intended eh Thank you Gareth

Leebert said:
Very nice shot for Whole Ian. Works very well in mono too. I love the way it brings out the textures.
Click to expand...
Cheers Lee. I love mono editing as you can get so much more detail from it without ruining it too much

Allan.H said:
Like the bread pic good choice for mono too
Click to expand...
Thanks very much Allan

Nostromo said:
Whole
I'm liking the black and white. Only one thing, the top slice is a little bit bright.
Click to expand...
Thanks very much Dom. When I put this up, I said to the missus that I guarantee someone will pick up on the over bright slice of bread, and they did Glad I wasn't let down. I tried editing as best I could, but to be honest, i'm not good on localised editing, tending to go all in on the whole image. I must try and get my head round that part
Canon 5D mkIII - Canon 16-35mm f/4L - Canon 24-70mm f/2.8L mkII - Canon 70-200mm f/2.8L mkII

I can see eco systems as being fragile, but not that lump of rock, how ever it is a great photo, lots of colours in the rock face which stand out against the blue sky. Tree bottom left is awkward but can not be cropped due to the Sun.

Hi Ian, like the bread shot ! Fragile, shoehorn um not sure but I like the photo and the thought of a fragile eco system. Nice shot !
My Flickr

Great image for the fragile theme Ian, and I like your interpretation too.
The fantastic colours are equalled by the composition and expert exposure control!
You've picked out some great detail in the rock and yet maintained a really nice exposure elsewhere too.
Very nice work indeed!

Well this week's theme could not have come at a better time - our last day in France and a trip out to a Chateau with a vineyard and winery..... 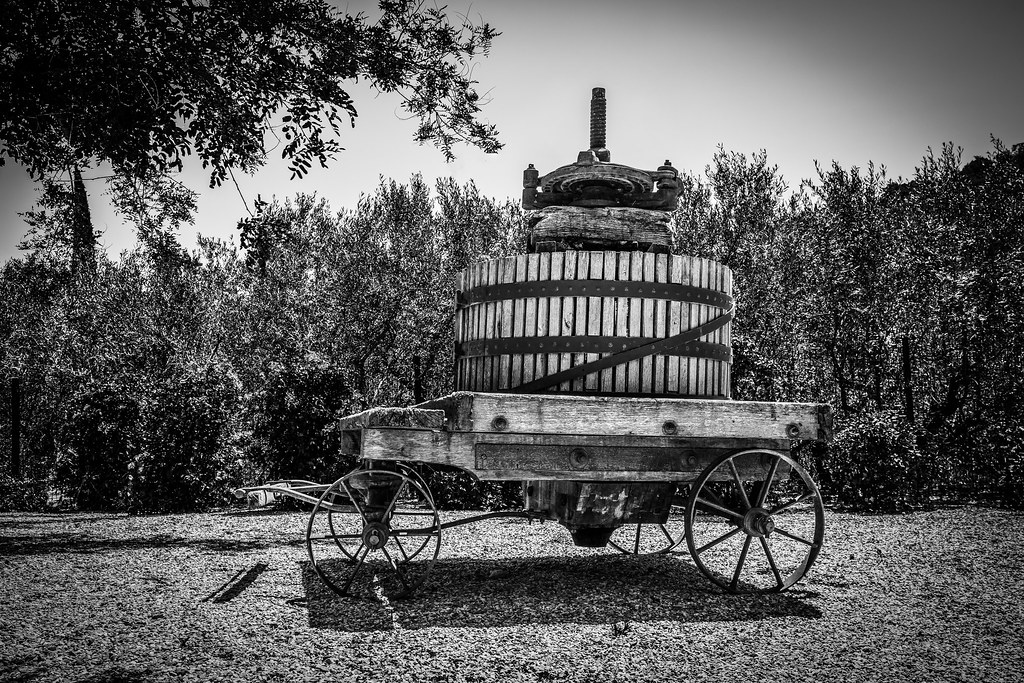 Nicely done and looks great in mono
"Wow - you must have a great camera!" .... "Yes, I taught it everything it knows."

Allan.H said:
Really nice the vignettes a bit heavy but a great find for the theme
Click to expand...
I tend to agree with you there Allan. I've had another little edit which I think has improved things slightly 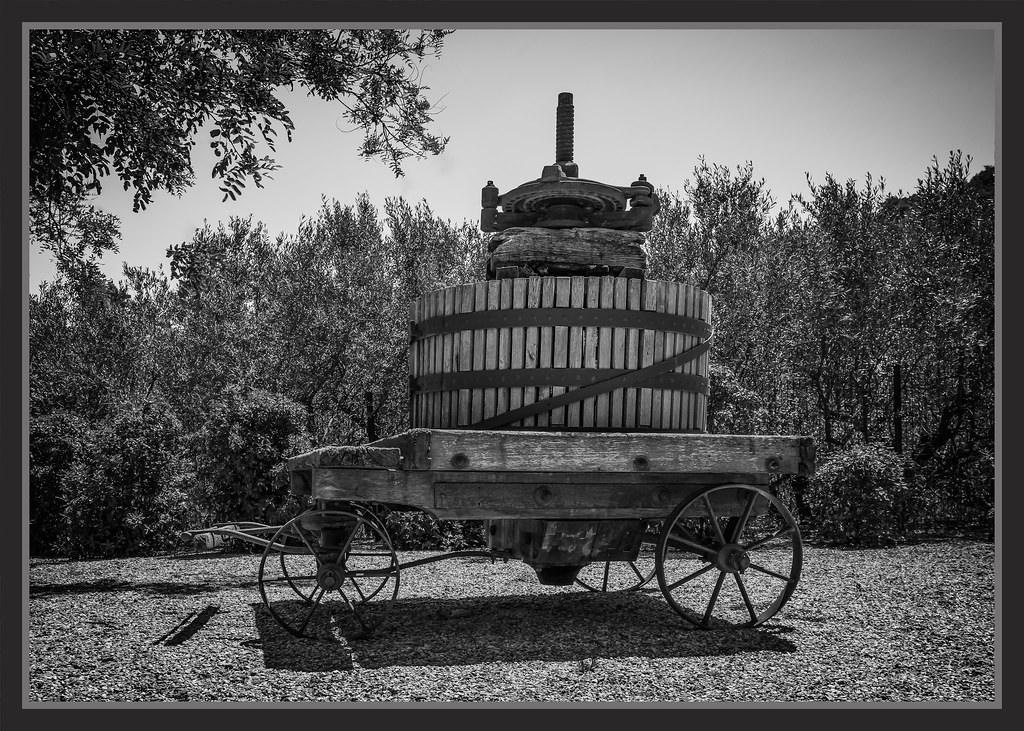 I agree! The subject suits the mono treatment so well....very nice processing!
I think your 'dialling back' of the vignette has improved it further, though it was only the top right that was perhaps a tad heavy on the sky.
A great find and exceedingly well photographed Ian!

Blimey, I haven't commented since April!!!!

Above - I initially thought that was something that could go in Pistonhead's Bad Parking thread. But no, from the comments I assume it was moving... They do seem to have issues with their spacial awareness though.
Certainly works well for the theme,
Hot - Great use of complimentary colours there, and the blue background works nicely with it too. The off centre, diagonal placement works well. I think I prefer it over #2.
Light - Well I like it. It works well in B&W, all nicely lined up, no tog shadow
Crowd - #1 should be the one, but I'm just fascinated by #2 which seems to be a traffic warden dishing out parking tickets to a row of push bikes (which would epitomise pointlessness). Both #1 & #2 tell a story, but #2 also asks a question.
Decay - I wish I'd seen this before I posted my Decay image. It's made me realise I could have posted a Harley Quinn shot. Damn... So anyway... B&W suits the shot, especially with the heavy vignette, and the position and perspective also add interest.
Free Week - I think having the complete and expired dandelions in the same shot make it work.
Whole - Like that. The use of the crumbs adds to the image, works well in B&W and the contrast between the board and the background is good.
Fragile - I agree with @-Oy-, it doesn't really sell 'fragile' to me, but that doesn't make it a bad image. The starbursty sun is nice, as are the rich colours.
Squash(ed) - That's a great old thing to find and being old suits B&W (though I'm guessing you've gone B&W to hide a carp sky). Quite a heavy vignette, added in post? Not sure it really needs it. Dunno.
ETA - Just seen the second version, the reduced vignette is better imo.
https://www.flickr.com/photos/timw1/

Thanks very much to everyone that's commented this week. As always, all positives welcomed, along with all critique. It helps me grow as a photographer and i'm learning what I like to shoot but also how others perceive my images
Canon 5D mkIII - Canon 16-35mm f/4L - Canon 24-70mm f/2.8L mkII - Canon 70-200mm f/2.8L mkII

WHOLE - very professional-looking shot. Well done!
FRAGILE - great shot, and an interesting description to go with it
SQUASHED - suits b/w perfectly, and a good idea for the theme.

Squashed - Really like the B&W conversion Ian, I actually prefer the first one. Good idea for the theme too!

Apologies but i've been off the radar for a while and probably will be for the next month, due to damn decorating

Firstly, a TIME ravaged building in my hometown. It's been empty for as long as I can remember and you'd like to think it could be put to good use instead of being a nightly hot spot for drunks and druggies

Secondly, due to my current status and depressing decorating i'm involved in..... 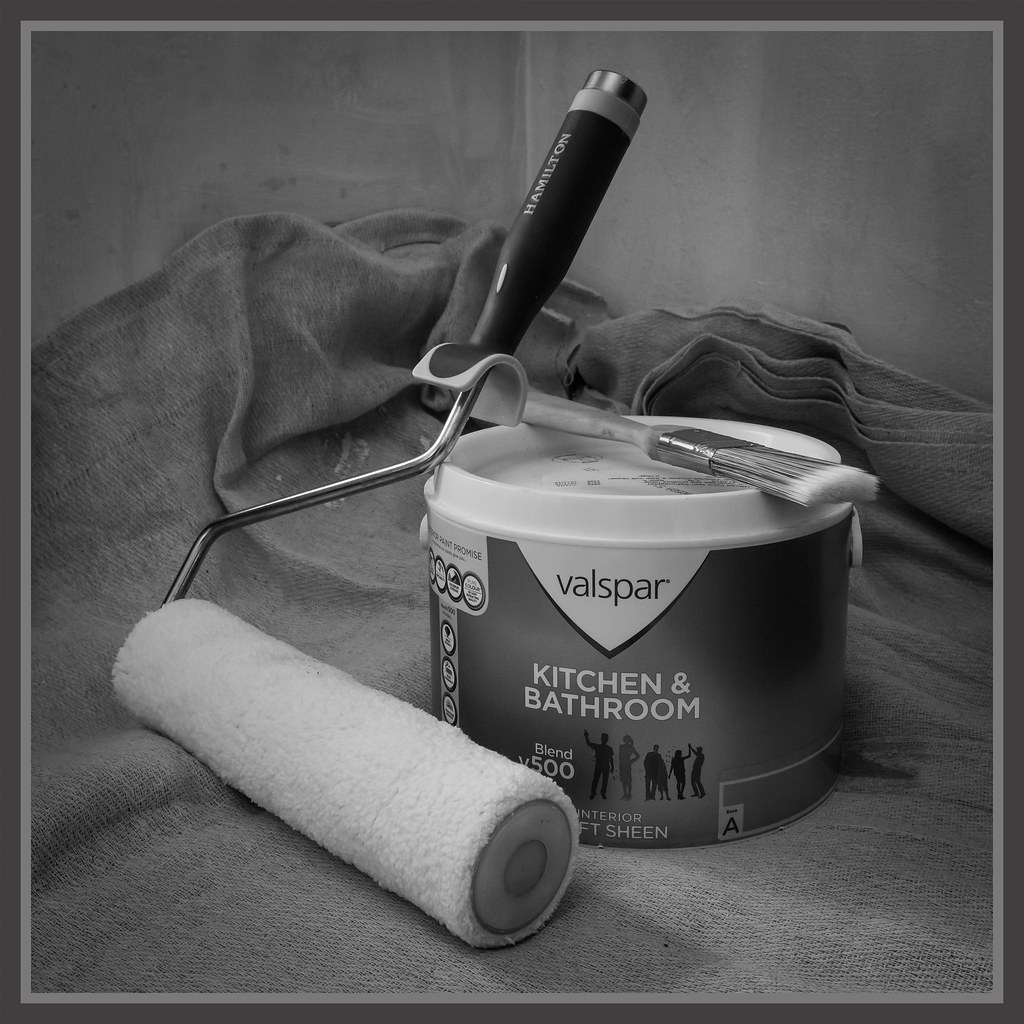 I like both of them particularly the building, not sure on the fascination you have for frames but each to their own, the paint is a nice composition,
I will say (I do a lot of decorating with my job) only used Valspar paint once and would never use it again.
OP
OP

Allan.H said:
I like both of them particularly the building
Click to expand...
Thanks very much Allan

Allan.H said:
not sure on the fascination you have for frames but each to their own
Click to expand...
Honestly, don't know myself but I just feel it adds something and finishes off the image for me

Two good takes on the themes, and I think both suit b&w well.

Time: beautifully crisp mono, simple yet effective composition and a perfect fit for the theme.
The border suits this image well....nice vignette too.
Full: the more I look at this, the more I like it....something I can't quite put my finger on, I just think it's really good - the composition and mono treatment works very well.
On a side note, the silhouettes of the people on the label of the paint tin....what's going on there I wonder? They look like they're having a party!...is decorating that much fun? Did I miss the memo on that?
My 52 challenge for 2019
My 52 challenge for 2020
Flickr number 1
Flickr number 2
Read my idiots guide to DIY Arduino Water Drop Controller here.

Time
I like the letter box crop and the black and white conversion.

Full
Another good black and white shot. I'm not a fan of decorating, so good luck with that.

So, still hanging on in there and managed to get to half way through the year.

Here's my 'Drink' effort for this week.... Oh, and just for @Allan.H I left the frame off 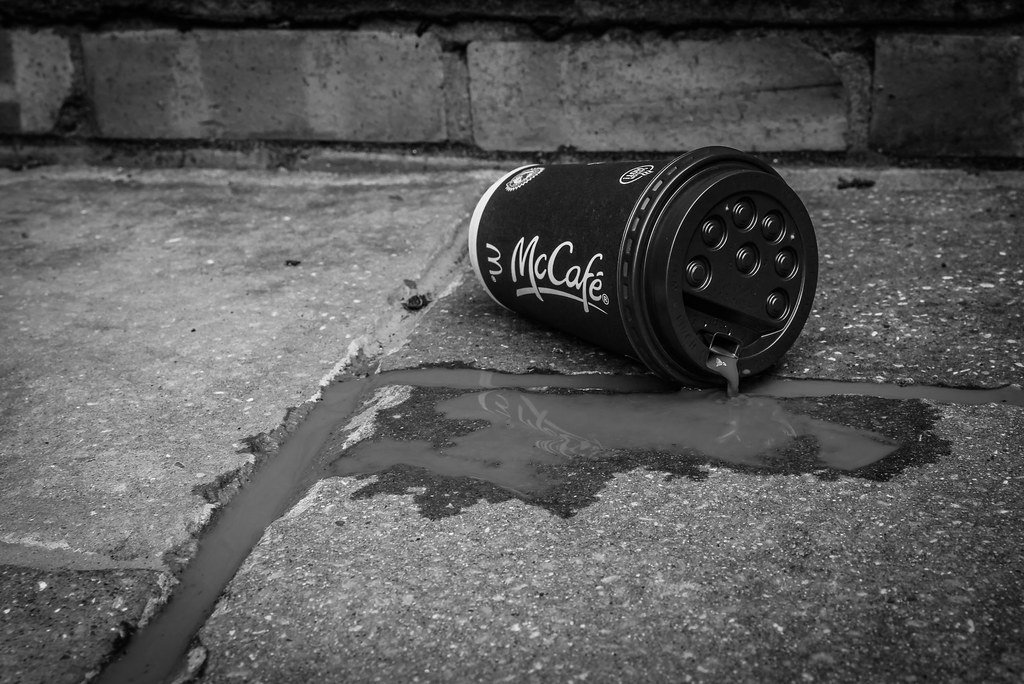